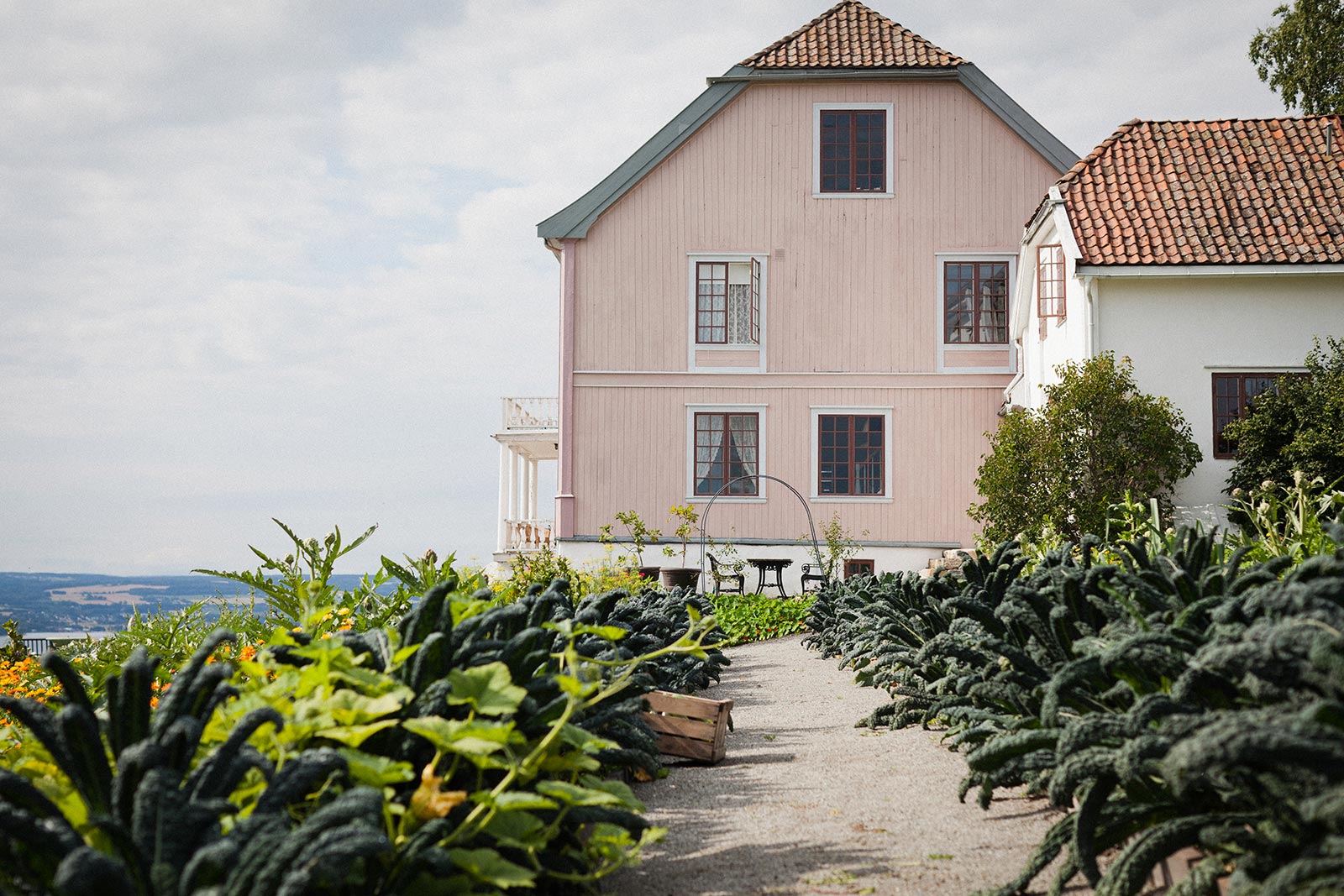 Hovelsrud is one of the large farms on Helgøya in Lake Mjøsa. Here there is a long tradition of cooking high quality food - we still have that. We cook in a sustainable way with respect for nature and with the best possible animal welfare.

Hovelsrud is located on Helgøya, the holy island, in the middle of Lake Mjøsa. The areas around Lake Mjøsa are some of the richest and most fertile agricultural areas in Norway. Hovelsrud is laid out so that this is utilized in the best possible way, perfectly located in the sunny slope with calcareous soil and with unlimited access to water from Lake Mjøsa.

In the 1840s, the farm was laid out by MP Nils Hoel, great-great-grandfather of Marianne, the current driver. In recent years, the house and garden have been returned to the original, with respect for history, and with a view to pursuing sustainable agriculture for the future. 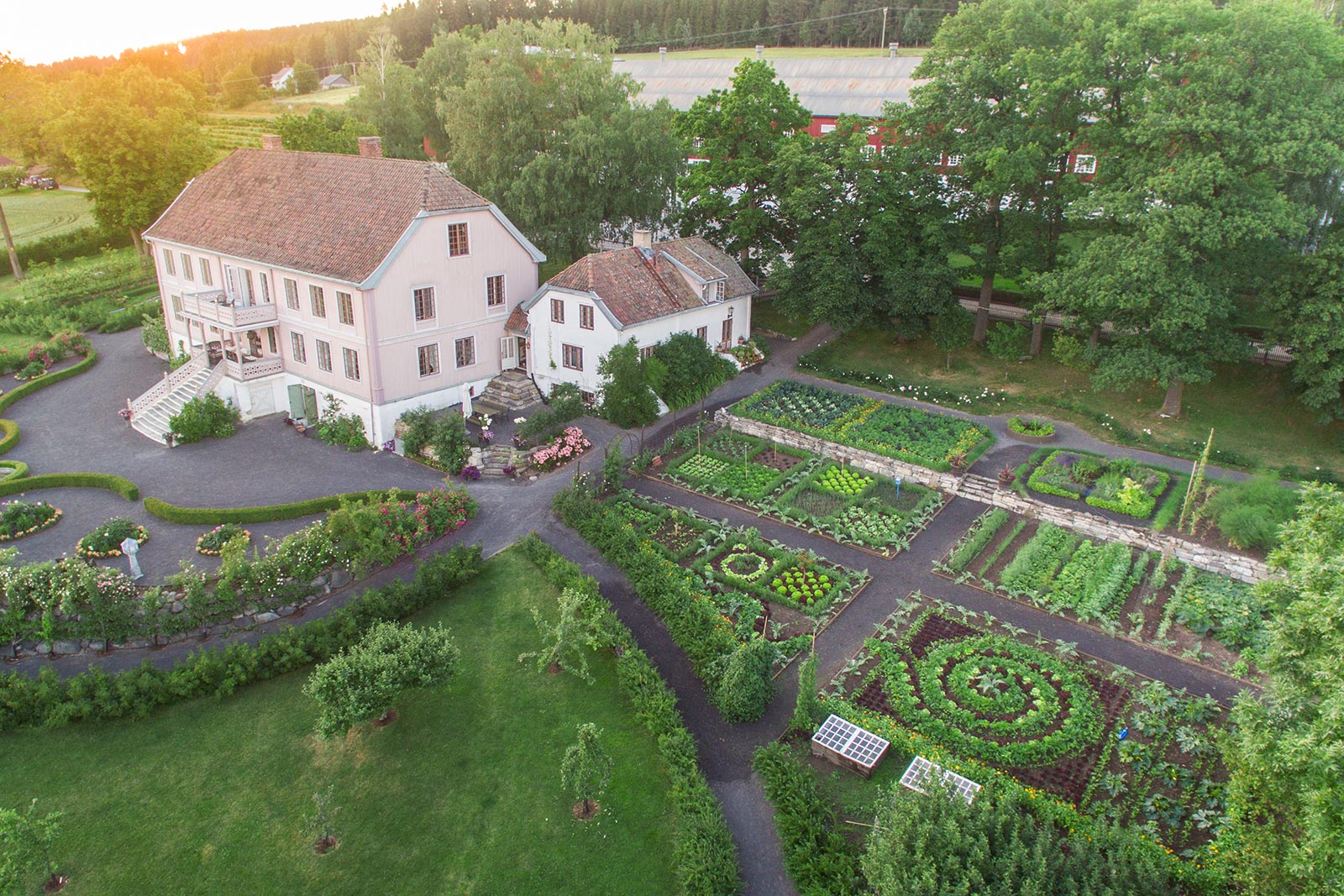 The agriculture of the future

The investment in ecology is an investment in the agriculture of the future. We believe that agriculture in Norway should be turned towards more sustainable production. We need to eat more local food, in season, and with better animal welfare.

At Hovelsrud we make clean food. We run a sustainable farm according to ecological principles, with the best possible animal welfare and a high ethical standard. Our animals and plants are treated with care, respect and with the environment in mind. It provides better quality. Our products are therefore valued by conscious consumers and the best restaurants in Norway.

"Right should be right, both for humans and animals." 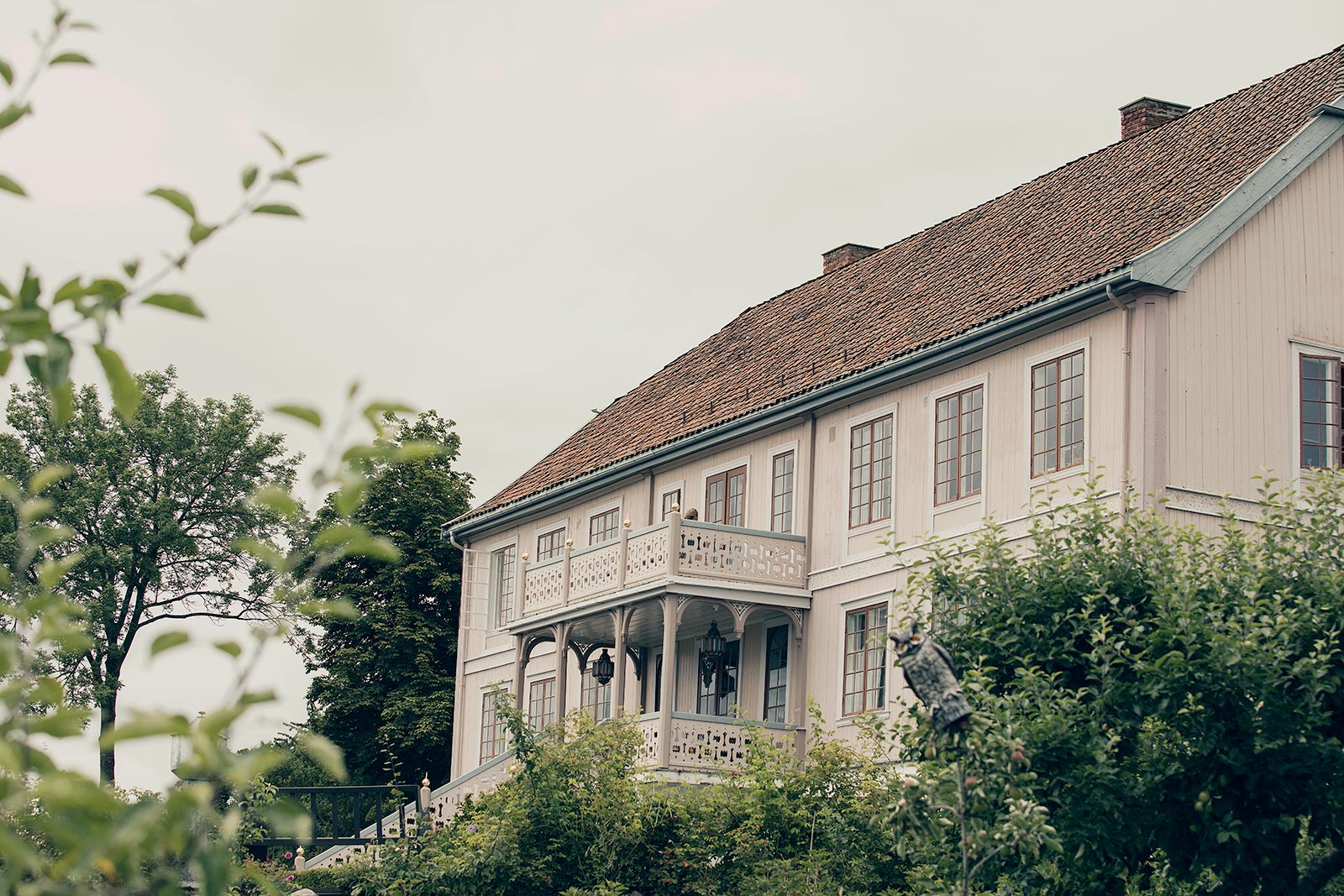 Long traditions lie behind what we do. Helgøya has a central location, in the middle of Lake Mjøsa, and the farm Hovelsrud, which is located with perhaps the very best location, west facing and on the sunny slope, with magnificent views of Lake Mjøsa. We have a rich and long history, and in addition it is well documented. Here, previous families have collected and written down the farm history, something we enjoy today. This means that we have been able to return and recreate the garden and the buildings as they once were. We have made a small historical review of the most important events.

For those who want to see the oldest and youngest generation during the harvest, we recommend this movie. 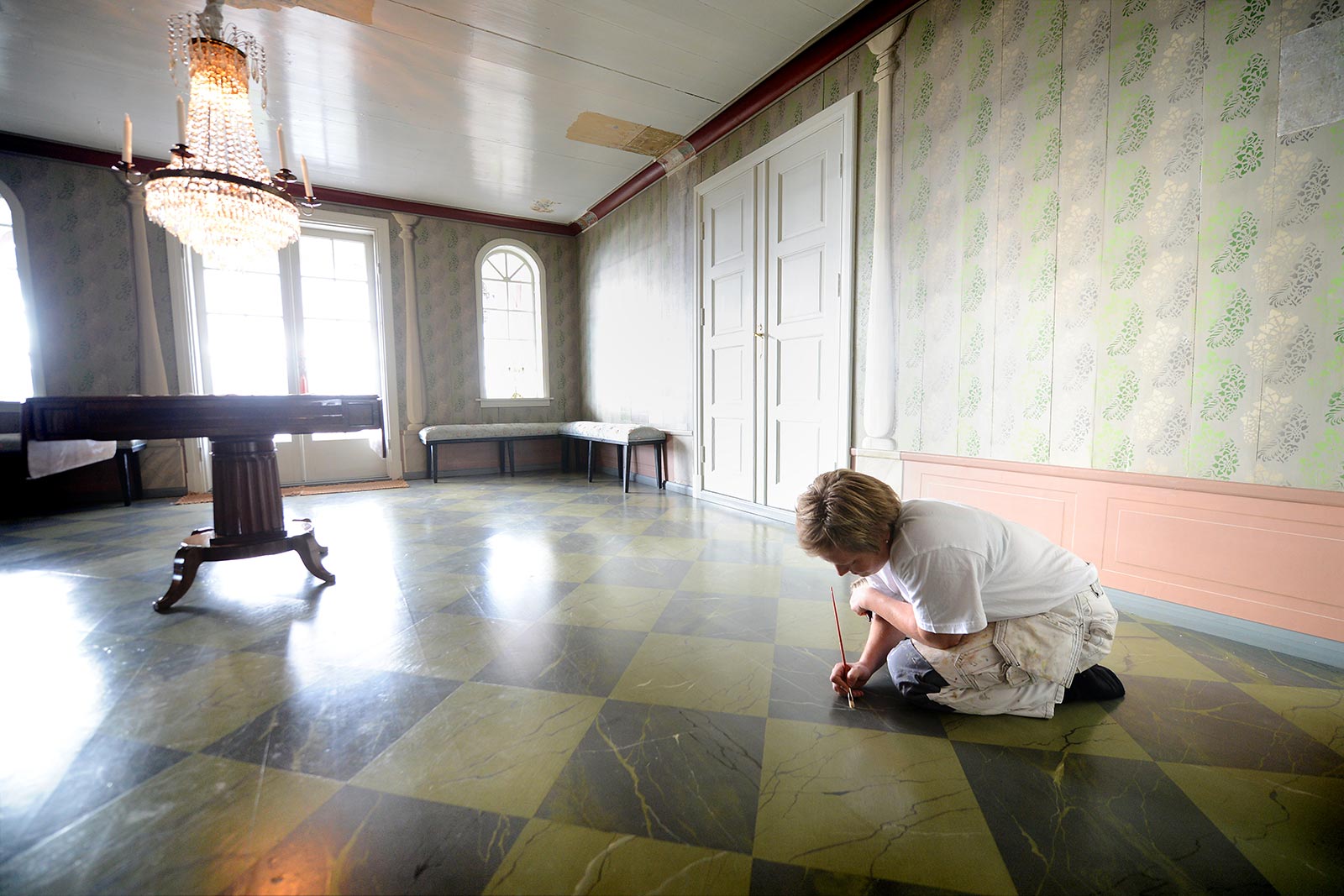 Hovelsrud is a large farm in the Norwegian context, at the same time small compared to similar facilities in Europe. Even though Norway is on the periphery of Europe, Norway followed the European ideals and currents of the 19th century. Hovelsrud shows this.

The return of the main building was based on recreating the house as it was when it was new. Decor and wallpaper were uncovered that were reconstructed based on traditional materials and techniques in the repatriation. Unique to Hovelsrud is the large amount of documentation found in the farm history. Here are drawings, descriptions, sketches, paintings and eventually photographs, which provided a unique basis for recreating, thanks to skilled craftsmen.

The restoration was awarded the national cultural-landscape prize from the Ministry of Agriculture and Food and Norwegian Cultural Heritage in 2012, as well as the EU cultural conservation prize; Europa Nostra Award in 2014.

The return of the house

“The owners of the property have restored the estate to its original splendor. The jury considered this project a powerful example for all private owners of historic properties ” 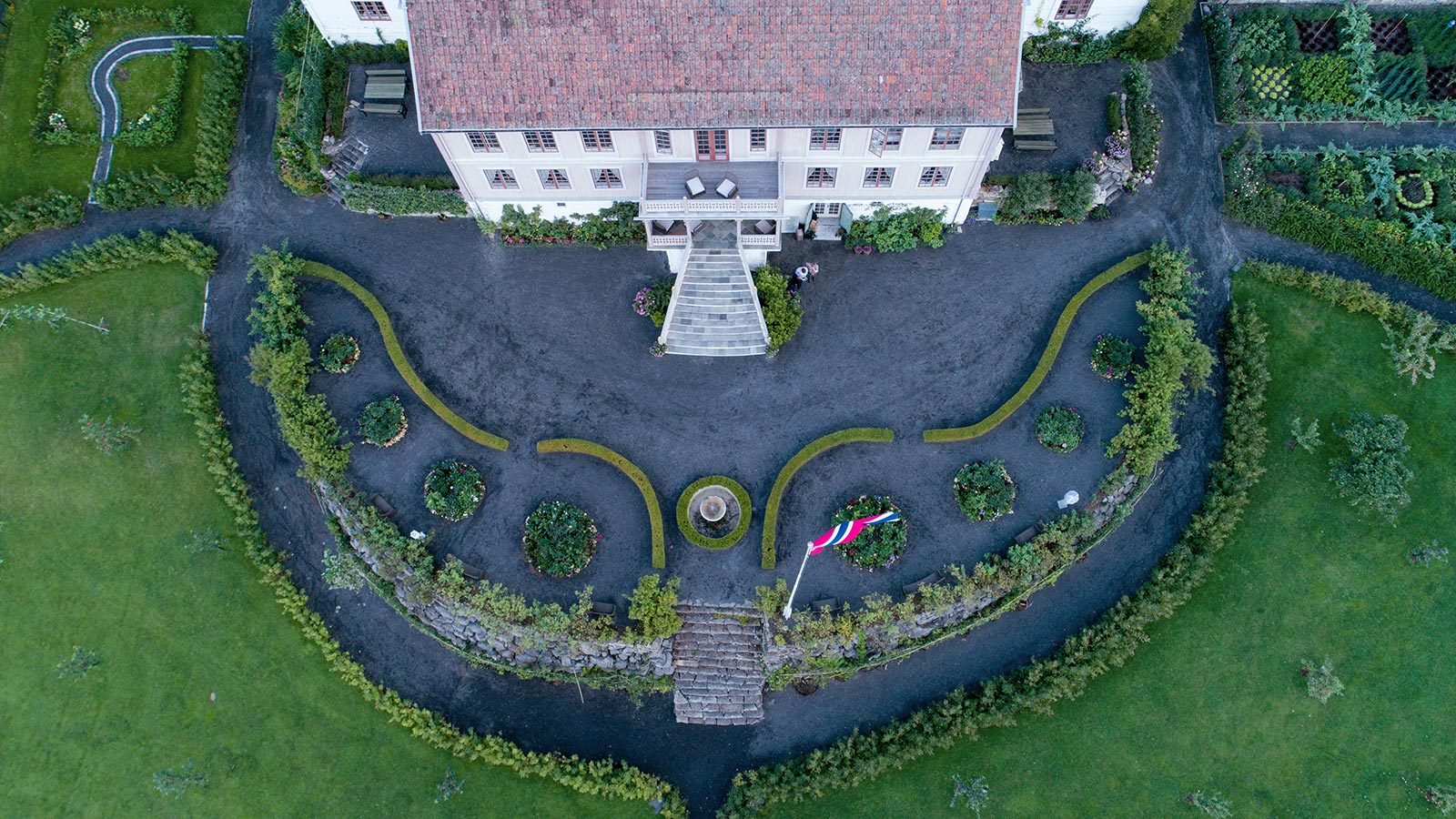 "It is important that we produce our food in a proper and sustainable way and that the animals we actually eat have lived a good life." 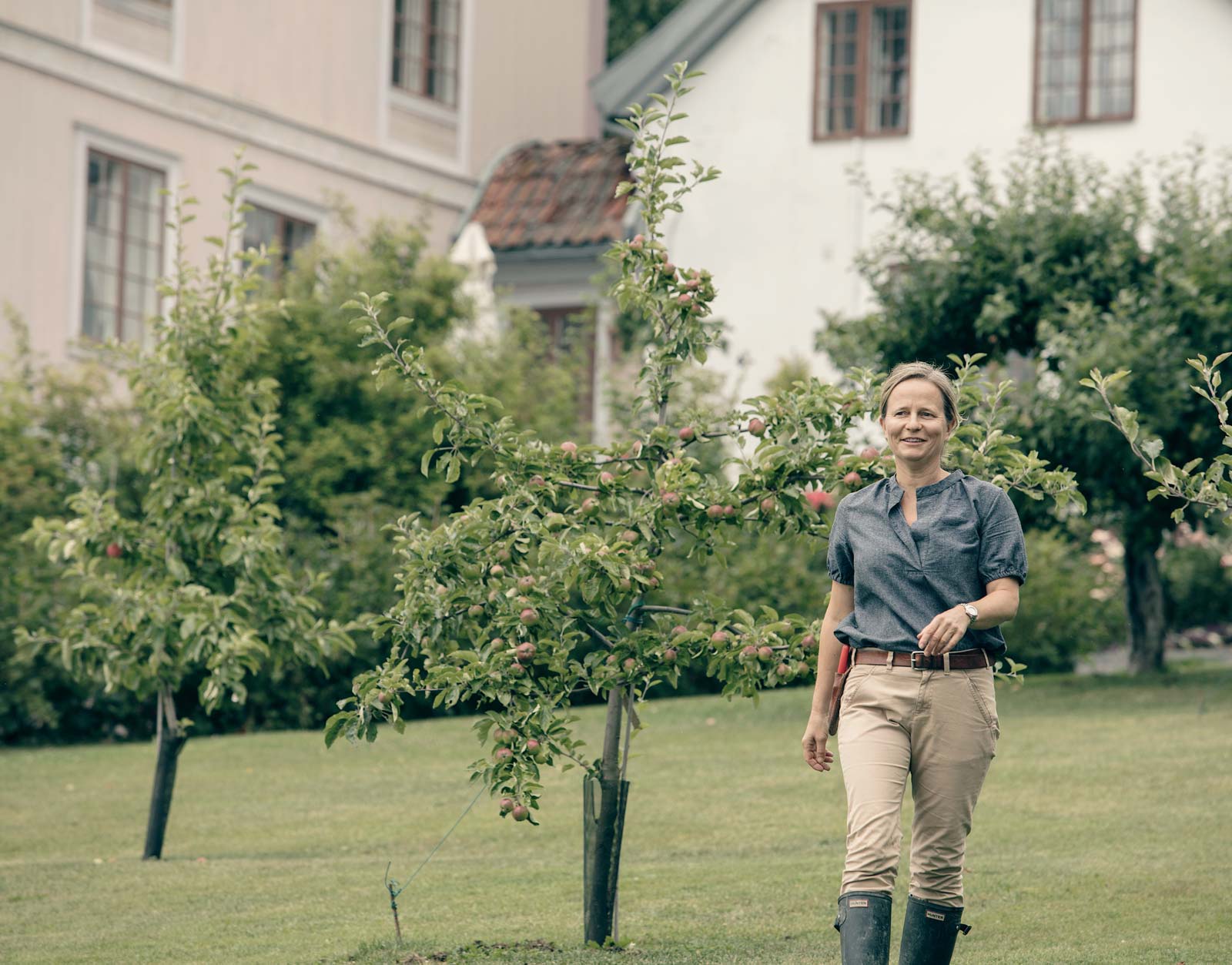 Do you want to know more about Hovelsrud and receive newsletters a few times a year? Fill out the email here:

!
Something went wrong. Please check your entries and try again.
Our Spring Sale Has Started